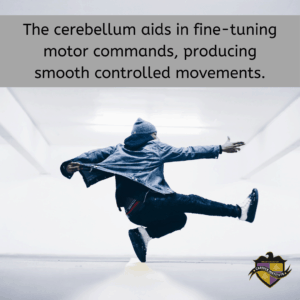 Traditionally, the cerebellum was thought to only play a role as the brain’s chief motor coordinator. We now know today that the cerebellum does so much more than that. The cerebellum contains body maps that help to give us an embodied sense of self. It’s constant communication with the body and cortex through feedforward, feedback and efferent copy pathways allow the cerebellum to fine-tune and sequence our action commands, producing SMOOTHNESS and grace in our movements. Although small, the cerebellum is mighty containing nearly half of the neurons in the brain.
Resource: The Body Has a Mind of Its Own: How Body Maps in Your Brain Help You Do (Almost) Everything Better, By Sandra Blakeslee and Matthew Blakeslee #carricktrained #carrickinsight #movement #grace #cerebellum#bodymaps #therapy #neuroscience #movementislife
adroll_adv_id = "JQRYGIAASJAQVKGT7T5UOK"; adroll_pix_id = "FRGOCDIUGFDMPACUSTM7MI"; adroll_version = "2.0"; adroll_current_page = "other"; adroll_currency = "USD"; adroll_language = "en_US";
Scroll to Top