Skip to content
The cerebellum is responsible for more than just coordination of movement- it also plays a huge role in our cognition, emotions and behavioral control.
For a long time, neuroscientists believed that the cerebellum was only responsible for the coordination and control of movements, but recent years has shown that it does so much more than that. One particular study found a link between the cerebellum and the ventral tegmentum area, a region of the brain responsible for pleasure and reward circuitry.
This finding could mean big things when it comes to the treatment of emotional and cognitive disorders such as Autism or addiction. Our ability to manipulate this circuit between the cerebellum and VTA could help physicians treat various cognitive and behavioral disorders. 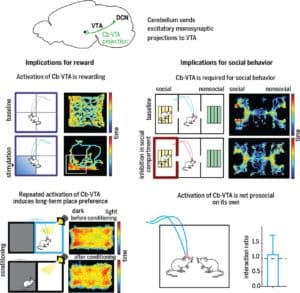